Taj Mahal, the pinnacle of Mughal architecture, was built by the Mughal emperor Shah Jahan (1628-1658), grandson of Akbar the great, in the memory of his queen Arjumand Bano Begum, entitled ‘Mumtaz Mahal’. Mumtaz Mahal was a niece of empress Nur Jahan and granddaughter of Mirza Ghias Beg I’timad-ud-Daula, wazir of emperor Jehangir. She was born in 1593 and died in 1631, during the birth of her fourteenth child at Burhanpur. Her mortal remains were temporarily buried in the Zainabad garden. Six months later, her body was transferred to Agra to be finally enshrined in the crypt of the main tomb of the Taj Mahal. The Taj Mahal is the mausoleum of both Mumtaz Mahal and Shah Jahan.

The mausoleum is located on the right bank of the river Yamuna at a point where it takes a sharp turn and flows eastwards. Originally, the land where the Taj Mahal presently stands belonged to the Kachhwahas of Ajmer (Rajasthan). 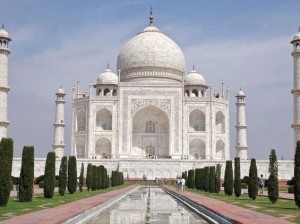 The land was acquired from them in lieu of four havelis as is testified by a court historian, Abdul Hamid Lahauri, in his work titled the Badshah-Namah and the firmans (royal decrees). For construction, a network of wells was laid along the river line to support the huge mausoleum buildings. Masons, stonecutters, inlayers, carvers, painters, calligraphers, dome-builders and other artisans were requisitioned from the whole of the empire and also from Central Asia and Iran. While bricks for internal constructions were locally prepared, white marble for external use in veneering work was obtained from Makrana in Rajasthan. Semi-precious stones for inlay ornamentation were brought from distant regions of India, Ceylon and Afghanistan. Red sandstone of different tints was requisitioned from the neighbouring quarries of Sikri, Dholpur, etc. It took 17 years for the monument complex to be completed in 1648.

In all, the Taj Mahal covers an area of 60 bighas, as the terrain gradually sloped from south to north, towards the river, in the form of descending terraces. At the southern point is the forecourt with the main gate in front and tombs of Akbarabadi Begum and Fatehpuri Begum, two other queens of Shah Jahan, on its south-east and south-west corners respectively called Saheli Burj 1 and 2.

The main tomb of the Taj is basically square with chamfered corners. The minarets here are detached, facing the chamfered angles (corners) of the main tomb on the main plinth. Red sandstone mosque on the western, and Mehman-Khana on the eastern side of the tomb provides aesthetically a clear colour contrast.

The Taj has some wonderful specimens of polychrome inlay art both in the interior and exterior on the dados, on cenotaphs and on the marble jhajjhari (jali-screen) around them.

Open from sunrise to sunset

Friday closed; open for offering prayer in the mosque between 12 Noon to 2 P.M.

Night viewing on Full Moon Day and two days before and after it, excluding Fridays and in the month of Ramzan