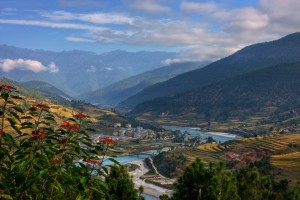 On arrival in Paro you will be greeted and escorted and further drive to Thimpu. Arrive Thimpu and transfer to the Hotel.
Later visits in Thimpu (subject to the arrival time of the flight in Paro).
Evening visit King’s Memorial Chorten continuously circumambulated by people, murmuring mantras and spinning their prayer wheels. Construction of this landmark was the idea of Bhutan’s third king, His Majesty Jigme Dorji Wangchuk (“the father of modern Bhutan”) who has wished to erect monument to world peace and prosperity. Completed in 1974 after his untimely death, it serves both as a memorial to the Late King and as a monument to peace.
Later visit to Trashichhoedzong, “fortress of the glorious religion”. This is the center of government and religion, site of monarch’s throne room and seat of Je Khenpo or Chief Abbot. Built in 1641 by the political and religious unifier of Bhutan, Shabdrung Ngawang Namgyal, it was reconstructed in 1960s in traditional Bhutanese manner, without nails or architectural plans.
IMP: Tashichhodzong in Thimphu is open only after Office Hours ( 4 – 5 pm in winters and 5 – 6 pm in summers )
Dinner & Overnight in the Hotel.

Day 02 : Thimphu
After breakfast excursion to Tango Goemba. This monastery was founded by Lama Gyalwa Lhanangpa in the 12th century and the present building was built in the 15th century by the ‘Divine Madman’, Lama Drukpa Kunley. In 1616 Shabdrung Ngawang Namgyal visited Tango and meditated in a cave near the monastery. His meditation helped ensure the defeat of an invading Tibetan army. The head Lama, a descendent of Lama Drukpa Kunley presented the goemba to Shabdrung, who carved a sandalwood statue of Chenrezig which he installed in
the monastery. The picturesque three-storey tower and several surrounding buildings were built in the 18th century by the eighth Desi, Druk Rabgye and Shabdrung Jigme Chhogyel added the golden roof in the 19th century.
Afternoon visit the National Library (closed on weekends), housing an extensive collection of priceless Buddhist manuscripts; the Institute for Zorig Chusum (closed on weekends) commonly known as the Painting School) where students undergo a 6-year training course in Bhutan’s 13 traditional arts and crafts. Later visit Textile and Folk Heritage Museum, a fascinating testimony of the Bhutanese material culture and living traditions.
Evening take a stroll around Thimphu main street visiting shops and local market. Also visit the government-run Handicrafts Emporium and local crafts shops, to browse through example of Bhutan’s fine traditional arts. Here you can buy hand-woven textiles, thangkha paintings, masks, ceramics, slate and wood carvings, jewelry, interesting items made from local materials.
Dinner & Overnight in the Hotel.

After breakfast, proceed to Trongsa across Pelela pass (3,300 m), the traditional boundary between east and west. The pass is marked by a large prayer flag and the ground is covered with high altitude dwarf bamboo. Stop enroute at Chendbji Chorten, which was built in 18th century by a Lama named Shida, it is Nepalese in style with eyes painted at four cardinal points.
Visit Trongsa Dzong. Like almost all towns in the Kingdom, this Dzong architecture dominates the entire Trongsa horizon dwarfing the surrounding buildings. Built in 1648, it was the seat of power over central and eastern Bhutan. Both the first and second King ruled the country from this ancient seat.
Also visit Ta Dzong, a cylindrical stone structure rising five storeys, was built in 1652 by Chogyal Minjur Tempa, a task entrusted to him by Zhabdrung Ngawang Namgyal. After more than 350 years, it has been resurrected into a classy museum, that represents a tasteful blend of tradition and modernity. There are 224 items on display including a sacred image of Sung Joenma Dorji Chang (self spoken Vajradharna), a bronze statue of Pema Lingpa, made by
himself, and a number of centuries-old treasures like dance and ritual costumes and objects, ancient prayer books, paintings and scrolls, and textiles.
Bumthang is the general name given to combination of four valleys – Chumey, Choekhor, Tang and Ura with altitude varying from 2,600m to 4,000m. It is home to many of prominent Buddhist temples and monasteries.
Dinner & Overnight in the Hotel.

After breakfast, transfer to airport to board the flight to Paro.
On arrival assistance at the airport and transfer to the hotel.
Afternoon in Paro, visit Ta Dzong (closed on Sundays and Mondays), originally built as Watchtower, which now houses National Museum. The extensive collection includes antique thangkha paintings, textiles, weapons & armour, household objects and a rich assortment of natural and historic artifacts.
Then walk down the trail to visit Rinpung Dzong, meaning (“fortress of the heap of jewels”), which has a long and fascinating history. Along the wooden galleries lining the inner courtyard are fine wall paintings illustrating Buddhist lore such as four friends, the old man of long life, the wheel of life, scenes from the life of Milarepa, Mount. Sumeru and other cosmic Mandala.
Dinner & Overnight in the Hotel.

After breakfast, excursion to Taktsang Monastery. It is one of the most famous of Bhutan’s monasteries, perched on the side of a cliff 900m above the Paro valley floor. It is said that Guru Rinpoche arrived here on the back of a tigress and meditated at this monastery and hence it is called ‘Tiger’s Nest’. This site has been recognized as a most sacred place and visited by
Shabdrung Ngawang Namgyal in 1646 and now visited by all Bhutanese at least once in their lifetime. On 19 April, 1998, a fire severely damaged the main structure of building but now this Bhutanese jewel has been restored to its original splendour.
Afternoon drive to Drukgyel Dzong, a ruined fortress where Bhutanese warriors fought Tibetan invaders centuries ago. The snowy dome of sacred Chomolhari, “mountain of goddess” can be seen in all her glory from the approach road to the Dzong.
Along the way, visit the 7th century Kyichu Lhakhang, one of the 108 temples built in the Himalayas by Tibetan King, Songtsen Gampo. The building of this temple marks the introduction of Buddhism in Bhutan.
Dinner & Overnight in the Hotel.
Overnight at the hotel in Paro (Altitude 2200m).

After breakfast depart Paro for flight to onward destination.