In the Footsteps of Loard Buddha 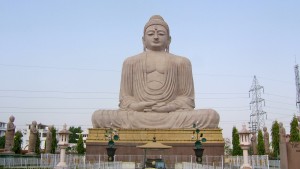 Welcome upon arrival at Delhi airport, after assistance transfer to Hotel.

Early morning transfer to New Delhi Railway station to catch the Train Superfast Shatabdi Express at 0610 hours. Arrive Lucknow at 1230 hours. From there transfer to Sravasti (170 km – 4.5 hours). On arrival at Sravasti, transfer to Hotel.

Overnight stay at Hotel in Saravasti.

Saheth: – Saheth is one of the most visited clusters of shrines in the Buddhist tourism circuit. Saheth covers an area of around 35 square Kilometers and is located in the very heart of Sravasti. The site

Falls on your right when you move nearly a kilometer Southwest from Maheth. The place rose to prominence when excavation works revealed that Saheth was the original site of once magnanimous Jetavana monastery.

Maheth: – Maheth is another important cluster of shrines in Sravasti. Though not as famous as Saheth, Maheth also has a cluster of shrines that are very popular among the tourists visiting Sravasti. In fact, Maheth was the actual site of the erstwhile Sravasti city. Spread across the area of near about 400 acres, Maheth was the site of numerous shrines and Stupas. Then transfer to Lumbini (Nepal). En route also visit Kapilvastu (174 Kms drive 3 – 4 Hours).

Kapilvastu a holy destination related deeply with the life of a legend, Lord Buddha, eventually Kapilvastu is the place where Lord Buddha had lived the childhood and the days of teenage, in complete luxury. The capital of king Shudhodhan, Kapilvastu still carries with it the mystic charm. It houses many sculptures of Buddhism, which present a landscape before that visitor that makes them feel calm, content. Kapilvastu carries the visitors away to the ancient days when Buddha was a small child, a prince. The place is situated 27 km south of Lumbini. On arrival at Lumbini, transfer to Hotel.

Morning visit to the Birth Place of Lord Buddha. The Lord Buddha was born in 623 BC in the sacred area of Lumbini located in the Terai plains of southern Nepal, testified by the inscription on the pillar erected by the Mauryan Emperor Asoka in 249 BC. Lumbini is one of the holiest places of one of the world’s great religions, and its remains contain important evidence about the nature of Buddhist pilgrimage centres from as early as the 3rd century BC. The complex of structures within the archaeological conservation area includes the Shakya Tank; the remains within the Maya Devi Temple consisting of brick structures in a cross-wall system dating from the 3rd century BC to the present century and the sandstone Ashoka pillar with its Pali inscription in Brahmi script. Additionally there  are the excavated remains of Buddhist viharas (monasteries) of the 3rd century BC to the 5th century AD and the remains of Buddhist stupas (memorial shrines) from the 3rd century BC to the 15th century AD. The site is now being developed as a Buddhist pilgrimage centre, where the archaeological remains associated with the birth of the Lord Buddha form a central feature. Then Transfer to Kushinagar (175 km – 4.5 hours). On arrival at Kushinagar, transfer to Hotel. Then visit Mahaparinirvana Temple and Rambhar Stupa (Cremation centre).

Kushinagar In Kushinagar, after teaching Dhamma for 45 yrs, Lord Buddha entered into Mahaparinirvana (passed away) under a sala tree at the age of 80 yrs on full moon day. It is here Lord Buddha announced the four holy places to be visited by every Buddhist pilgrim that is Lumbini- Birth place, Bodhgaya- Enlightenment place, Sarnath- First Sermon place & Kushinagar- Mahaparinirvana place.

It is here in Kushinagar after his entering into

Mahaparinirvana his body was cremated and the ashes (remains) were divided into eight parts and distributed among eight claimants who enshrined the remains in their kingdoms and built Stupas.

Vaishali:- Vaishali today is a small village surrounded by banana and mango groves as well as rice fields. Lord Buddha visited Vaishali frequently and at Kolhua, close by, preached his last sermon. To commemorate the event.On arrival at Rajgir, transfer to Hotel. Overnight stay at Hotel.

Bimbisara Prison This Jail is the place where King Bimbisara was imprisoned by his son Ajatshatru, during his last days of life. This place was chosen by the king himself for his incarceration, as from here he could see Lord Buddha going up the Griddhakuta Hill for meditation.

Ruins of Nalanda University: Nalanda University founded in the 5th century AD, is famous as the ancient seat of learning. The ruins of the world’s most ancient university.  Though the Buddha visited Nalanda several times during his lifetime, this famous center of Buddhist learning shot to fame much later, during 5th-12th centuries. Hieun Tsang stayed here in the 7th century AD and left detailed description of the excellence of education system and purity of monastic life practiced here.Then transfer to Bodhgaya (95 km – 03 hours drive). On arrival at Bodhgaya, transfer to Hotel.

Mahabodhi Temple, Bodhgaya – In the 6th century B.C. Prince Siddhartha Gautama attained Supreme Enlightenment at this Holy place and became the Buddha. The Mahabodhi Mahavihara has now been declared a World Heritage Site by the UNESCO on the 27th June 2002.

Overnight at hotel in Varanasi.

Early morning boat ride on the Holy River Ganges, return to hotel for breakfast. then AM excursion of Sarnath (Sarnath is the place where Lord Buddha preached his first sermon after attaining Enlightenment at Bodhgaya). .

Sarnath :- Sarnath is the place where the Buddha preached his first sermon is home to perhaps the most interesting landmark on India’s religious and historical landscape. This remarkable structure honouring the Buddha was built by Ashoka There’s the Deer Park, where the Buddha preached his first sermon after attaining enlightenment. Towards the southern fringes of the Deer Park are the Mulgandha Vihar, the Dhamek Stupa and the Ashoka Pillar. The 34-metre-high Dhamek Stupa towers over the gardened heart of Sarnath and marks the spot where the Buddha is said to have preached the famous first sermon. The majestic Ashoka Pillar to its east records the visit of Emperor Ashoka to Sarnath and was originally adorned by a capitol of four lions. Now, the four lions, adopted as the National Emblem of India.

Early morning arrive Agra station. Transfer to Hotel for wash and change only. Then proceed for the half day sight seeing of Agra visiting one of the world’s most popular monuments – Taj Mahal (closed on Friday) built by Mughal Emperor Shahjahan for his Empress Mumtaj Mahal. The construction believed to have taken 22 years to complete with over 20,000 craftsmen worked round the clock. Yamuna River is situated in the centre of the town. Lunch will be at hotel. Afternoon transfer to Delhi (204 km – 4.5 hours drive). On arrival at Delhi, transfer to Hotel.

Visit the Lotus Temple, also called Bahai Temple (closed on all Monday). This distinctive lotus shaped marvel in marble is surrounded by a landscaped garden and is a symbol of peace. Similar in style to the Sydney opera house is this white marble and concrete structure in the shape of a lotus flower. This is the Asian headquarters of the Bahai faith, India Gate (war memorial dedicated to the lives of laid down by  the Indian soldiers), pas thru the president’s residence – formerly the Viceroy’s Palace, parliament House and the Secretariat buildings, – an interesting blend of the Victorian and 20th century architecture. Then visit Raj Ghat, Set in the midst of deep green lawns, Rajghat is the place where Mahatma Gandhi was cremated. A memorial to the father of the nation, Rajghat is a simple square platform with a black memorial stone with “Hey Ram” inscribed on it. Also have some time for shopping at the famous Tourist market called Janpath. Evening transfer to International airport to catch the flight for onward destination.

Arrival Home Country / Place in the morning with sweet memories of India visit.