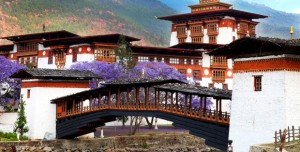 In clear weather, Druk Air’s flight to Bhutan provides a wonderful view of Himalayan scenery. Whether flying along the Himalayan range from Kathmandu or over the foothills from Kolkatta, it is a fascinating journey, culminating in an exciting descent past forested hills into the kingdom. On arrival at Paro airport, you will be met by our representative. On completion of airport formalities, there will be an interesting drive of about 1.1/2 hours duration to Thimphu, the modern capital town of Bhutan.

Thimphu, perhaps the most unusual capital city in the world, is the seat of government. This bustling town is home to Bhutan’s Royal family, the civil servants, and foreign missions with representation in Bhutan. It is also the headquarters for a number of internationally funded development projects.
Morning visit to Trashichhoedzong (from outside), the beautiful medieval fortress/monastery which houses most of the Government’s office and King’s Throne room It is also the summer residence of Je Khenpo, the Chief Abbot. Then, visit the National Memorial Chorten. The building of this landmark was originally envisaged by Bhutan’s third king, His Majesty Jigme Dorji Wangchuk (“the father of modern Bhutan”) who has wished to erect monument to world peace and prosperity. Completed in 1974 after his untimely death, it serves both as a memorial to the Late King and as a monument to peace. Also visit the Folk & Textile Heritage Museums, a fascinating testimony of Bhutan’s living traditions. Then, drive to Paro. The valley of Paro contains a wealth of attractions. Visit Ta Dzong (closed on Sundays and Mondays), once a watchtower, built to defend Rinpung Dzong during inter-valley wars of the 17th century, Ta Dzong was inaugurated as Bhutan’s National Museum in 1968. Afterwards, walk down a hillside trail to visit Rinpung Dzong, which has a long and fascinating history. Evening take a stroll around Paro main street.

After breakfast drive to the airport for flight to onward destination.