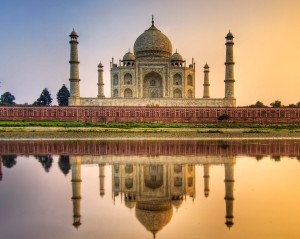 Har Ki Pauri – is considered to be the city’s focal point, where devotees assemble for a holy dip in the Ganges. Legend says that this is where a drop of nectar fell as a result of the manthan – churning of the oceans – Mythlogically it signifies the start of the world.

Mansa Devi Mandir (Temple) :- Mansa Devi Mandir, on top of a hill near the center of town is reached by cable car or by a road that gently rambles uphill, starting from the Railway Road. The views around the temple are the main attractions here.

Overnight stay at Hotel in Haridwar.

Lakshman Jhula:-  Lakshman Jhula is an iron suspension bridge situated in Rishikesh in Indian state of Uttarakhand . It is made over river Ganges to cross the river and is a landmark of Rishikesh. A similar bridge near Lakshman Jhula is Ram Jhula It is said that Lakshmana crossed Ganges on jute ropes between the places where this bridge is built. Lakshman Jhula was built in 1839. There are spectacular views from the bridge.

Sapt Rishi Ashram and Sapt Sarovar:- Sapt Rishi Ashram and Sapt Sarovar A picturesque place near Haridwar where seven great sages or Saptarishis, namely Kashyapa, Vashisht, Atri, Vishwamitra, Jamadagni, Bharadwaja and Gautam, said to have meditated. The Ganges split herself into seven currents at this place so that the Rishis would not be disturbed by the flow. Then return back to Haridwar. Evening visits to some temple.

Overnight stay at Hotel in Haridwar.

Morning transfer to Kurukshetra (05 hours drive). The Purans tell stories of how Lord Brahma created the Universe from Kurukshetra. The legend of Shiva and Sati comes alive in the temples dedicated to the mother Goddess one sees here. The Mahabharata battle fought here, extols innumerable places of pilgrimage, not to forget Kurukshetra as the land of Bhagwad Gita. The Brahma Sarover is the best place to begin the pilgrimage. This is a vast water body. In the centre of the tank stands the Sarveshwar Mahadev Temple looking like a lotus. The eastern section of the tank is 1800 ft long and 1500 ft wide while the western section is a square of 1500 ft length and 1500 ft breadth. The tank is 15 ft deep. This large waterbody is edged with 20 ft wide platforms, stairs and a 40 ft wide `parikarma’. In this section, a number of meditation chambers have been built for the convenience of pilgrims. Belief is, that Lord Brahma conceptualized the site of the tank, giving it special sanctity. To bathe here on the days of an eclipse, amavasya (moonless night) or the kumbh is believed to absolve one of sins. The tank lies about 3 km from the railway station. A number of temples lie in close vicinity of this holy water body, of which the prominent one is the Lakshmi Narayan Temple. This temple lies opposite the Brahma Sarover. It is dedicated to Lord Narayan and His consort Lakshmi. The architecture of the temple belongs to the late 18th century, which adds a touch of history to the visit. The temple’s tall pinnacle proclaims its presence from a distance. Another water body of great sanctity is the Sannehit Sarover. It lies about 1 km from the Brahma Sarover. Legends tell us that the sarover was formed with holy water that flowed from Lord Brahma’s navel. As such, to pray at the tank, to bathe or even touch it, here, brings blessings on pilgrims. Prayer and ablutions done here on the nights of amavasya (night of total darkness), eclipse or the Kumbh bestows blessings of a thousand ashwamedha yajnas say the learned. Prayers offered here for the ancestor’s holds special sanctity. The sarover spreads 1500 ft in length and 550 ft in breadth. Bathing ghats and steps have been set up here for pilgrims. Temples dedicated to Dhruva Narayan, Mother Goddess Durga and Lord Hanuman can be seen here. Continue drive to Delhi (04 hours drive). On arrival transfer to hotel.

Overnight stay at Hotel in Delhi.

On arrival at Agra transfer to hotel.Then visit .Taj Mahal built by Shah Jahan in 1630 for his queen Mumtaz Mahal to enshrine her mortal remains. This architectural marvel is a perfectly proportioned masterpiece fashioned from white marble that stands testimony to the still of 20,000 craftsmen brought together from Persia, Turkey, France and Italy and who took 17 year to complete this ‘Love Poem in Marble’. (Taj Mahal is closed on Friday). Then transfer to closely located Mathura (a little over one hour drive – towards Delhi) Mathura is the Birth place of Lord Krishna. For about 3000 Year it was the hub of culture and civilization.Visit Shri Krishna Janmbhumi, Dwarakadheesh Temple, and Gita Mandir. Shri Krishna Janmbhumi is the Birth Place of Lord Krishna. Dwarakladheesh Temple was built in 1814; it is the main temple in the town. Gita Mandir is located on the outskirts of the City – the Temple Carving and painting is a major attraction.

Overnight stay at Hotel in Mathura.

Morning  transfer o Vrindavan – just 15 km (30 minute drive) Vrindavan is believed to have been the stage on which Krishna performed his famous romantic and sportive roles. Unlike busy Mathura. Vrindavan seems perpetually to be dreaming and imaginatively, re-living its romantic past. There are hundreds of shrines in the town, as also numerous Ghats and several sacred tanks, of which one called Brahama kund and another named Govinda kund are the most highly venerated. The most famous as well as the finest temple in Vrindavan is that of Govinda Dev. Also visit Rangaji Temple, built in 1851 is dedicated to Lord Ranganatha or Rangaji depicted as Lord Vishnu, Radha Vallabh Temple & Gaya Rajput.

KRISHNA BALRAM MANDIR (ISKCON VRINDAVAN): This is an International spiritual   organization having 400 centers around the world. This was founded by srila A.C. Bhakti Vedanta Swami Prabhupada. Thousands of pilgrims and International tourists visited Vrindavan centre which is having beautiful temple of Lord Krishna. Then  transfer to Delhi. On arrival at Delhi have shopping at famous Tourist market called Janpath. . Then departure transfer to International airport for onward flight.