This former duck-hunting reserve of the Maharajas is one of the major wintering areas for large numbers of aquatic birds from Afghanistan, Turkmenistan, China and Siberia. Some 364 species of birds, including the rare Siberian crane, have been recorded in the park.

Keoladeo National Park, located in the State of Rajasthan, is an important wintering ground of Palaearctic migratory waterfowl and is renowned for its large congregation of non-migratory resident breeding birds. A green wildlife oasis situated within a populated human-dominated landscape, some 375 bird species and a diverse array of other life forms have been recorded in this mosaic of grasslands, woodlands, woodland swamps and wetlands of just 2,873 ha. This ‘Bird Paradise’ was developed in a natural depression wetland that was managed as a duck shooting reserve at the end of the 19th century. While hunting has ceased and the area declared a national park in 1982, its continued existence is dependent on a regulated water supply from a reservoir outside the park boundary. The park’s well-designed system of dykes and sluices provides areas of varying water depths which are used by various avifaunal species. 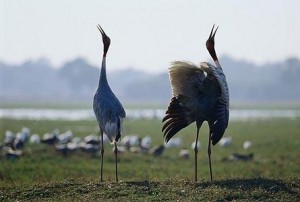 Due to its strategic location in the middle of Central Asian migratory flyway and presence of water, large congregations of ducks, geese, coots, pelicans and waders arrive in the winter. The park was the only known wintering site of the central population of the critically endangered Siberian Crane, and also serves as a wintering area for other globally threatened species such as the Greater Spotted Eagle and Imperial Eagle. During the breeding season the most spectacular heronry in the region is formed by 15 species of herons, ibis, cormorants, spoonbills and storks, where in a well-flooded year over 20,000 birds nest.

Criterion (x): The Keoladeo National Park is a wetland of international importance for migratory waterfowl, where birds migrating down the Central Asian flyway congregate before dispersing to other regions. At time of inscription it was the wintering ground for the Critically Endangered Siberian Crane, and is habitat for large numbers of resident nesting birds. Some 375 bird species have been recorded from the property including five Critically Endangered, two Endangered and six vulnerable species. Around 115 species of birds breed in the park which includes 15 water bird species forming one of the most spectacular heronries of the region. The habitat mosaic of the property supports a large number of species in a small area, with 42 species of raptors recorded.

This is the only park in India that is completely enclosed by a 2 m high boundary wall that minimises the possibilities of any encroachment and biotic disturbances, but there is no possibility of a buffer zone. As the wetlands of Keoladeo are not natural, they are dependent on the monsoon and on water pumped in from outside, traditionally provided from the “Ajan Bandh” reservoir. The water shortage caused by the erratic rainfall in the region is being addressed by initiating two large water resources projects that will bring water from permanent water sources in the region. There has been some concern expressed over possible air and water pollution effects from the adjacent city of Bharatpur, but these effects are unknown at present.

Through eco-development activities in the surrounding villages, the grazing of cattle within the park has been minimised and the local communities are also engaged in participatory resource conservation, which includes removal of invasive alien species. Keoladeo attracts many visitors who are taken for bird watching in bicycle rickshaws by trained local guides from surrounding villages, which provides additional livelihoods as well as reduces noise pollution.

A recently started conservation programme for the 27 satellite wetlands surrounding this park has further enhanced the protection of the migratory waterfowl arriving in the Central Asian flyway to winter in Western India.

The property has effective legal protection under the provisions of Wildlife (Protection) Act, 1972 and Indian Forest Act, 1927. The site is managed by the Rajasthan Forest Department with the support of local communities and national and international conservation organizations, and a management plan has been developed for the protection and management of the property.

The major threats to the property are the water supply (both quantity and quality); invasive vegetation (Prosopis, Eichhornia, Paspalum); and inappropriate use of the property by neighbouring villages. These issues are being dealt with through the management plan, and two projects have been developed to bring a permanent solution to the water crisis. Invasive alien species have been removed through cooperative arrangements with the surrounding populations. The 2 m high boundary wall that surrounds the park virtually eliminates the threats of poaching or pollution, and there is no encroachment or habitations inside the park. Noise pollution from the adjoining Bharatpur city and National Highway are minimal. Due to stringent legal environmental regulations in India, all proposed developmental activities have to be subjected to a stringent environmental assessment process.

The site is situated in eastern Rajasthan, the park is 2 km south-east of Bharatpur and 50 km west of Agra. The area consists of a flat patchwork of marshes in the Gangetic plain, artificially created in the 1850s and maintained ever since by a system of canals, sluices and dykes. Normally, water is fed into the marshes twice a year from inundations of the Gambira and Banganga rivers, which are impounded on arable land by means of an artificial dam called Ajan Bund, to the south of the park. The first time, usually in mid-July, is soon after the onset of the monsoon and the second time is in late September or October when Ajan Bund is drained ready for cultivation in winter. Thus, the area is flooded to a depth of 1-2 m throughout the monsoon (July-September), after which the water level drops. From February onwards the land begins to dry out and by June only some water remains. For much of the year the area of wetland is only 1,000 ha. Soils are predominantly alluvial – some clay has formed as a result of the periodic inundations.

In a semi-arid biotype, the park is the only area with much vegetation, hence the term ‘Ghana’ meaning ‘thicket’. The principal vegetation types are tropical dry deciduous forest, intermixed with dry grassland in areas where forest has been degraded. Apart form the artificially managed marshes, much of the area is covered by medium-sized trees and shrubs. Forests, mostly in the north-east of the park, are dominated by kalam or kadam, jamun and babul. The open woodland is mostly babul with a small amount of kandi and ber. Scrublands are dominated by ber and kair. The aquatic vegetation is rich in species and is a valuable source of food for waterfowl.

An estimated 65 million fish fry are carried into the park’s water impoundments by river flooding every year during the monsoon season, which provides the food base for large numbers of wading and fish-eating birds. Some 364 species of bird have been recorded in the park, which is considered to be one of the world’s finest areas for birds, with a unique assemblage of species.

Among landbirds is a rich assortment consisting of warblers, babblers, bee-eaters, bulbuls, buntings, chats, partridges and quails. Grey hornbill and Marshall’s iora are also present. There are many birds of prey including the osprey, peregrine, Pallas’ sea eagle, short-toed eagle, tawny eagle, imperial eagle, spotted eagle and crested serpent eagle. Greater spotted eagle has recently been recorded breeding here, a new breeding record for the species in India and lesser spotted eagle nested in the park in 1986, the first nesting record for the species in India for some time.