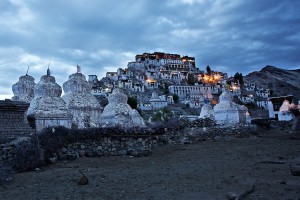 Leh was the capital of the Himalayan kingdom of Ladakh, now the Leh district in the Indian state of Jammu and Kashmir. Leh district, with an area of 45,110 km2, is the second largest district in the country, after Kutch, Gujarat (in terms of area). The town is dominated by the ruined Leh Palace, the former mansion of the royal family of Ladakh, built in the same style and about the same time as the Potala Palace-the chief residence of the Dalai Lama until the 14th Dalai Lama fled to Dharamsala, India, during the 1959 Tibetan uprising.

Upon arrival at Hotel, check in at Hotel.

Full day is at leisure to acclimatize yourself because of high altitude of Leh as it is 3500 Mtrs above the sea level.

In the evening you will be visiting Leh Bazaar.

Full day visit to Thiksay, Hemis monastery and Shey Palace. It is quite interesting to visit the Thiksay monastery early in the morning to witness the “praying ceremony”.

Thiksay Monastery or Thiksay Gompa   is 17 Kms – Approx 30 minutes from Leh. It is a gompa (monastery) affiliated with the Gelug sect of Tibetan Buddhism. It is located on top of a hill in Thiksey village.  It is noted for its resemblance to the Potala Palace in Lhasa, Tibet and is the largest gompa in central Ladakh, notably containing a separate set of buildings for female renunciates that has been the source of significant recent building and reorganisation.The monastery is located at an altitude of 3,600 metres (11,800 ft) in the Indus Valley. It is a twelve-story complex and houses many items of Buddhist art such as stupas, statues, thangkas, wall paintings and swords. One of the main points of interest is the MaitreyaTemple installed to commemorate the visit of the 14th Dalai Lama to this monastery in 1970; it contains a 15 metres (49 ft) high statue of Maitreya, the largest such statue in Ladakh, covering two stories of the building.

After you visit continue your drive towards Hemis monastery.

Hemis monastery is 42 Kms – Approx 01.15 Hours from Leh. It is a Tibetan Buddhist monastery of the Drukpa Lineage. The monastery was re-established in 1672 by the Ladakhi king Sengge Namgyal. The annual Hemis festival honoring Padmasambhava is held here in early June.

After your visit to Hemis monastery you will be driven back to Leh. On your way back visit Shey Palace.

Shey Palace The Shey Monastery or Gompa and the Shey Palace complex are structures located on a hillock in Shey. Shey was the summer capital of Ladakh in the past.The palace, mostly in ruins now, was built first in 1655, near Shey village, by the king of Ladakh, Deldan Namgyal, also known as Lhachen Palgyigon. It was used as a summer retreat by the kings of Ladakh. The Shey Monastery was built in 1655 on the instructions of Deldon Namgyal, in the memory of his late father, Singay Namgyal, within the palace complex. The monastery is noted for its giant copper with gilded gold statue of a seated Shakyamuni Buddha. Shakyamuni Buddha is so named since Buddha was the sage (muni) of the Sakya people who resided in the Himalayan foothills and their capital was Kapilvastu. It is said to be the second largest such statue in Ladakh

Spituk monastery also better as Spituk Gompa or Pethup Gompa, is a Buddhist monastery. The site of Spituk was blessed by the Arhat Nyimagung. It was founded by Od-de, the elder brother of Lha Lama Changchub Od when he came to Maryul in the 11th Century. He introduced the monastic community. When Lotsewa Rinchen Zangpo (Translator) came to that place he said that an exemplary religious community would arise there and so the monastery was called spituk (exemplary). During the time of Dharma raja Gragspa Bum-Ide the monastery was restored by Lama Lhawang Lodos and the stainless order of Tsonkhapa was introduced and it has remained intact as such till present. Founded as a Red Hat institution, the monastery was taken over by the Yellow Hat sect in the 15th century.

After your visit continue your drive towards Uleytokpo. On your way visit Alchi monastery.

Alchi Monastery or Alchi Gompa (monastery and temple complex), Leh on the banks of the Indus river. Alchi is regarded as one of the most important Buddhist centers in Ladakh and also as the monastic jewels of Ladakh. The Alchi monastery dates back to nearly one thousand years and so the effect of the Tibetan influence can be seen in the local culture. There are five shrines in the Choskor temple complex which has some splendid wall paintings. One of its walls features thousands of miniature sized pictures of the Buddha. Three large sized images made of clay painted brightly are its focal attraction. No longer an active religious center, it is looked after by monks from the Likir monastery. Since last 500 years, the religion is not practiced in the Alchi monastery. Over a period of time the Yellow hat sect (Gelugpa) shifted the religious activities to another place which is 30 kms away, known as Likir.

After you visit continue your drive to Uleytokpo.

Upon arrival at Uleytokpo, check in at camp.

In the Evening, enjoy sitting on the bank of the river coming down from the Ridzong side.

Morning you will be driven to Lamayuru monastery (48 Kms – Approx 1.30 hours) via Khalsi.

Khaltse or Khalsi is a village in the Leh district .It is located in the Khalsi tehsil, 337 km from Srinagar on the old main road to Leh, where it crossed the Indus over an iron bridge. Much of its importance is because it is the place where the road from Kashmir debouches into the Indus Valley.

Lamayuru Monastery Located on the main Kargil Leh highway between Bodhkharbu and Kha-la-che, on a steep rock mountain Lamayuru is amongst the oldest monateries in Leh and is beleived to be in existence along the same time as Alchi monastery. Though almost in ruins Lamayuru monastery is home to about 150 monks of Red-Hat sect of Buddhism. It is beleived to have housed more than 400 monks in earlier times. The monastery is famous for its rich wall paintings, collection of thangkas, murals, scriptures and statues of different forms of Buddha and other deities.

Upon arrival at Leh, check in at hotel.

Morning you will be transferred to Tso Moriri (220 Kms – Approx 07 Hours).

Upon arrival, check in at hotel.

Rest of the day at leisure.

Overnight stay at the Hotel.

Morning you will visit Korzok village with its houses and Korzok monastery appearing like a mirage.

Korzok Monastery   is a Tibetan Buddhist monastery belonging to the Drukpa Lineage. It is located in the Korzok village, on the northwestern bank of Tso Moriri (lake) in Leh District. The gompa (monastery), at 4,560 metres (14,960 ft), houses a Shakyamuni Buddha and other statues. It is home to about 70 monks.

Also visit few barley fields at Korzok must be among the highest cultivation in the world.

Later you will be driven back to Leh.

Upon arrival at Leh, check in at hotel.

Today you will be assisted and transferred to airport to connect your flight for onward destination.