On a gentle slope in the foothills of the Himalayas, where wooded hills give way to alluvial grasslands and tropical forests, the Manas sanctuary is home to a great variety of wildlife, including many endangered species, such as the tiger, pygmy hog, Indian rhinoceros and Indian elephant.

Manas Wildlife Sanctuary is located in the State of Assam in North-East India, a biodiversity hotspot. Covering an area of 39,100 hectares, it spans the Manas river and is bounded to the north by the forests of Bhutan. The Manas Wildlife Sanctuary is part of the core zone of the 283,700 hectares Manas Tiger Reserve, and lies alongside the shifting river channels of the Manas River. The site’s scenic beauty includes a range of forested hills, alluvial grasslands and tropical evergreen forests. The site provides critical and viable habitats for rare and endangered species, including tiger, greater one-horned rhino, swamp deer, pygmy hog and Bengal florican. Manas has exceptional importance within the Indian sub-continent’s protected areas, as one of the most significant remaining natural areas in the region, where sizeable populations of a large number of threatened species continue to survive. 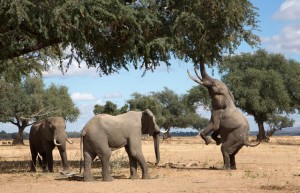 Criterion (vii): Manas is recognized not only for its rich biodiversity but also for its spectacular scenery and natural landscape. Manas is located at the foothills of the Eastern Himalayas. The northern boundary of the park is contiguous to the international border of Bhutan manifested by the imposing Bhutan hills. It spans on either side of the majestic Manas river flanked in the east and the west by reserved forests. The tumultuous river swirling down the rugged mountains in the backdrop of forested hills coupled with the serenity of the alluvial grasslands and tropical evergreen forests offers a unique wilderness experience.

Criterion (ix): The Manas-Beki system is the major river system flowing through the property and joining the Brahmaputra river further downstream. These and other rivers carry an enormous amount of silt and rock debris from the foothills resulting from the heavy rainfall, fragile nature of the rock and steep gradients of the catchments. This leads to the formation of alluvial terraces, comprising deep layers of deposited rock and detritus overlain by sandy loam and a layer of humus represented by bhabar tracts in the north. The terai tract in the south consists of fine alluvial deposits with underlying pans where the water table lies near to the surface. The area contained by the Manas-Beki system gets inundated during the monsoons but flooding does not last long due to the sloping relief. The monsoon and river system form four principal geological habitats: Bhabar savannah, Terai tract, marshlands and riverine tracts. The dynamic ecosystem processes support broadly three types of vegetation: semi-evergreen forests, mixed moist and dry deciduous forests and alluvial grasslands. The dry deciduous forests represent an early stage in succession that is constantly renewed by floods and is replaced by moist decidous forests away from water courses, which in turn are replaced by semi evergreen climax forests. The vegetation of Manas has tremendous regenerating and self-sustaining capabilities due to its high fertility and response to natural grazing by herbivorous animals.

Criterion (x): The Manas Wildlife Sanctuary provides habitat for 22 of India’s most threatened species of mammals. In total, there are nearly 60 mammal species, 42 reptile species, 7 amphibians and 500 species of birds, of which 26 are globally threatened. Noteworthy among these are the elephant, tiger, greater one-horned rhino, clouded leopard, sloth bear, and other species. The wild buffalo population is probably the only pure strain of this species still found in India. It also harbours endemic species like pygmy hog, hispid hare and golden langur as well as the endangered Bengal florican. The range of habitats and vegetation also accounts for high plant diversity that includes 89 tree species, 49 shrubs, 37 undershrubs, 172 herbs and 36 climbers. Fifteen species of orchids, 18 species of fern and 43 species of grasses that provide vital forage to a range of ungulate species also occur here.
Integrity
The property is a wildlife sanctuary with a focus on maintaining the integrity of the property as a natural area. It forms the core of a larger national park, the boundaries of which are clearly demarcated and supervised. Manas Wildlife Sanctuary is buffered on the north by the Royal Manas National Park of Bhutan and on the east and west less effectively by the Manas Tiger Reserve. Transboundary cooperation is therefore important to the effectiveness of its protection.
Protection and management requirements
The property, which has six national and international designations (i.e. World Heritage Site, National Park, Tiger Reserve (core), Biosphere Reserve (national), Elephant Reserve (core) and Important Bird Area) has the highest legal protection and strong legislative framework under the provisions of Indian Wildlife (Protection) Act, 1972 and Indian Forest Act, 1927/Assam Forest Regulation 1891. The property benefits from government support at both national and regional levels as well as involvement of national and international conservation organisations.

The property is managed under the administration of the Assam Forest Department / Bodoland Territorial Council. A comprehensive and approved Management Plan is an essential requirement, together with effective patrolling and enforcement capacity to deal with the threats of encroachment, grazing and poaching. The provision of adequate infrastructure, skilled personnel and monitoring arrangements for the property are all essential requirements. Scientific research and monitoring for habitat and invasive species management and recovery of wildlife populations is a particular imperative for management to ascertain and maintain the Outstanding Universal Value of the property. The property is home to 400 varieties of wild rice, also making the management of its biodiversity values of high importance to food security.

Provision of effective tourism facilities, visitor information and interpretation is also a priority for the park management. A sustainable financing mechanism needs to be ensured to provide the necessary financial resources for the long term management of the property. The surrounding buffer zones are managed on a multiple use basis, and a balance is required between conservation and resource extraction in the management of these areas. Involvement of local communities who live and make use of the areas adjacent to the reserve in protection efforts for the property is essential, and a key management objective is to enhance their engagement and awareness in the interest of the preservation of the property. There is potential to extend the property to coincide with the boundaries of the national park of which it forms the core. The establishment of a transboundary world heritage property across the Indian and Bhutanese Manas Tiger Conservation Landscape would enable greater coordination and cooperation in the management of habitat and wildlife populations and would strengthen protection as well.
Long Description
Manas takes its name from the Goddess Manasa. The site is noted for its spectacular scenery, with a variety of habitat types that support a diverse fauna, making it the richest of all Indian wildlife areas. The park represents the core of an extensive tiger reserve that protects an important migratory wildlife resource along the West Bengal to Arunachal Pradesh and Bhutan borders. Its wetlands are of international importance. It is also the single most important site for the survival of pygmy hog, hispid hare and golden langur.

The park, which includes part of Manas Reserve Forest and all of North Kamrup Reserve Forest, constitutes the core of Manas Tiger Reserve located in the forest divisions of Kachugaon, Haltugaon, Western Assam Wildlife and North Kamrup.

Lying in the foothills of the Outer Himalaya, the area is low-lying and flat. The Manas River flows through the western portion of the park, where it splits into three separate rivers, and joins the Brahmaputra some 64 km further south. These and other rivers running through the tiger reserve carry an enormous amount of silt and rock debris from the foothills, resulting from the heavy rainfall, fragile nature of the rock and steep-gradients of the catchments. This leads to the formation of alluvial terraces, comprising deep layers of deposited rock and detritus overlain with sand and soil of varying depth, shifting river channels and swamps. The area of the Boki basin, in the west of the park, is sometimes inundated during the monsoon. The three main types of vegetation are: tropical semi-evergreen forests in the northern part of the park; tropical moist and dry deciduous forests (the most common type); and extensive alluvial grasslands in the western part of the park.

There is also a considerable variety of aquatic flora along river banks and in the numerous pools. Dry deciduous forests represent early stages in succession and are replaced by moist deciduous forests away from water courses, which, in turn, are succeeded by tropical semi-evergreen climax forest. Grasslands cover about 50% of the park.

Over 450 species of bird have been recorded, including the threatened Bengal florican, great pied hornbill, wreathed hornbill and other hornbills. Uncommon waterfowl species include spot-billed pelican, lesser adjutant and greater adjutant.

Reptiles include a variety of snakes, gharial and monitor lizard. Assam roofed turtle has recently been recorded.