Nestled high in West Himalaya, India’s Valley of Flowers National Park is renowned for its meadows of endemic alpine flowers and outstanding natural beauty. This richly diverse area is also home to rare and endangered animals, including the Asiatic black bear, snow leopard, brown bear and blue sheep. The gentle landscape of the Valley of Flowers National Park complements the rugged mountain wilderness of Nanda Devi National Park. Together they encompass a unique transition zone between the mountain ranges of the Zanskar and Great Himalaya, praised by mountaineers and botanists for over a century and in Hindu mythology for much longer. 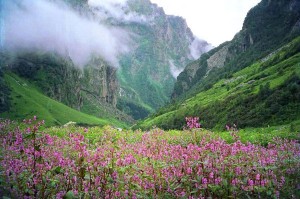 The Nanda Devi and Valley of Flowers National Parks are exceptionally beautiful high-altitude West Himalayan landscapes with outstanding biodiversity. One of the most spectacular wilderness areas in the Himalayas, Nanda Devi National Park is dominated by the 7,817 m peak of Nanda Devi, India’s second highest mountain which is approached through the Rishi Ganga gorge, one of the deepest in the world. The Valley of Flowers National Park, with its gentler landscape, breath-taking beautiful meadows of alpine flowers and ease of access, complements the rugged, inaccessible, high mountain wilderness of Nanda Devi. Apart from some community-based ecotourism to small portions of these parks, there has been no anthropogenic pressure in this area since 1983. This property therefore acts as a control site for the maintenance of natural processes, and is of high significance for long-term ecological monitoring in the Himalayas.

Both parks contain high diversity and density of flora and fauna of the west Himalayan biogeographic zone, with significant populations of globally threatened species including the snow leopard, Himalayan musk deer and numerous plant species. Covering 71,210 ha, these two parks are surrounded by a large buffer zone of 514,857 ha which encompasses a wide range of elevation and habitats. This entire area, located within the Western Himalayas Endemic Bird Area (EBA), supports significant populations of mountain ungulates and galliformes that are prey to carnivores such as the snow leopard.

Criterion (vii): The Nanda Devi National Park is renowned for its remote mountain wilderness, dominated by India’s second highest mountain at 7,817 m and protected on all sides by spectacular topographical features including glaciers, moraines, and alpine meadows. This spectacular landscape is complemented by the Valley of Flowers, an outstandingly beautiful high-altitude Himalayan valley. Its ‘gentle’ landscape, breath-taking beautiful meadows of alpine flowers and ease of access has been acknowledged by renowned explorers, mountaineers and botanists in literature for over a century and in Hindu mythology for much longer.

Criterion (ix):The Nanda Devi National Park, with its wide range of high altitude habitats, holds significant populations of flora and fauna including a number of threatened mammals, notably snow leopard and Himalayan musk deer, as well as a large population of bharal, or blue sheep. Abundance estimates for wild ungulates, galliformes and carnivores within the Nanda Devi National Park are higher than those in similar protected areas in the western Himalayas. The Valley of Flowers is internationally important on account of its diverse alpine flora, representative of the West Himalaya biogeographic zone. The rich diversity of species reflects the valley’s location within a transition zone between the Zanskar and Great Himalaya ranges to the north and south, respectively, and between the Eastern and Western Himalaya flora. A number of plant species are globally threatened, several have not been recorded from elsewhere in Uttarakhand and two have not been recorded in Nanda Devi National Park. The diversity of threatened species of medicinal plants is higher than has been recorded in other Indian Himalayan protected areas. The entire Nanda Devi Biosphere Reserve lies within the Western Himalayas Endemic Bird Area (EBA). Seven restricted-range bird species are endemic to this part of the EBA.

The Nanda Devi and Valley of Flowers National Parks are naturally well protected due to their remoteness and limited access. Both the parks were unexplored until the 1930s and have not been subjected to anthropogenic pressures since 1983 with the exception of some well regulated community-based ecotourism to small portions of the parks. Therefore, both the parks contain relatively undisturbed natural habitats that now act as control sites for the continuance of natural processes. The integrity of this property is further enhanced by the fact that both the parks form the core zones of the Nanda Devi Biosphere Reserve and are encircled by a large buffer zone of 514,857 ha. The Kedarnath Wildlife Sanctuary and the Reserved Forest Divisions located west, south and east of the Biosphere Reserve provide additional buffer to this Biosphere Reserve. The local communities residing in the buffer zones of the Nanda Devi Biosphere Reserve actively participate in the conservation programmes of the Forest Department.

The long-term protection of the Nanda Devi and Valley of Flowers National Parks is dependant on the maintenance of the high levels of protection and current low levels of anthropogenic pressures within the parks. Regular monitoring of the status of wildlife and their habitats in these parks is critical and needs to be continued. Tourist or pilgrim management, and development activities such as hydro power projects and infrastructure inside the buffer zone of the Nanda Devi Biosphere Reserve are the existing and potential threats that need to be addressed.

The Nanda Devi National Park is one of the most spectacular wilderness areas in the Himalayas. It is dominated by the peak of Nanda Devi, which rises to over 7,800 m. No people live in the park, which has remained more or less intact because of its inaccessibility. It is the habitat of several endangered mammals, especially the snow leopard, Himalayan musk deer and bharal.

The park lies in Chamoli district, within the Garhwal Himalaya. It comprises the catchment area of the Rishi Ganga, an eastern tributary of Dhauli Ganga which flows into the Alaknanda River at Joshimath. The area is a vast glacial basin, divided by a series of parallel, north-south oriented ridges. These rise up to the encircling mountain rim along which are about a dozen peaks, the better known including Dunagiri, Changbang and Nanda Devi East.

Nanda Devi West, India’s second-highest mountain, lies on a short ridge projecting into the basin and rises up from Nanda Devi East on the eastern rim. Trisul, in the south-west, also lies inside the basin. The upper Rishi Valley, often referred to as the ‘Inner Sanctuary’, is fed by Changbang, North Rishi and North Nanda Devi glaciers to the north and by South Nanda Devi and South Rishi glaciers to the south of the Nanda Devi massif. There is an impressive gorge cutting through the Devistan-Rishikot ridge below the confluence of the North and South Rishi rivers. The Trisuli and Ramani glaciers are features of the lower Rishi Valley or ‘Outer Sanctuary’, below which the Rishi Ganga enters the narrow, steep-sided lower gorge.

Forests are restricted largely to the Rishi Gorge and are dominated by fir, rhododendron and birch up to about 3,350 m. Forming a broad belt between these and the alpine meadows is birch forest, with an understorey of rhododendron. Conditions are drier within the ‘Inner Sanctuary’, becoming almost xeric up the main Nanda Devi glaciers. Beyond Ramani, the vegetation switches from forest to dry alpine communities, with scrub juniper becoming the dominant cover within the ‘Inner Sanctuary’. Juniper gives way altitudinally to grasses, prone mosses and lichens, and on riverine soils to annual herbs and dwarf willow.

Woody vegetation extends along the sides of the main glaciers before changing gradually to squat alpines and lichens. Local populations use a total of 97 species, for medicine, as food plants, fodder, fuel, tools, house building and fibres, as well as for religious purposes.

The basin is renowned for the abundance of its ungulate populations, notably Himalayan musk deer (listed as ‘lower risk’ threatened species). Mainland serow and Himalayan tahr are also common. The distribution of goral does not appear to extend to within the basin, although the species does occur in the vicinity of the national park. Large carnivores are common leopard, Himalayan black bear and brown bear, the existence of which has yet to be confirmed. The only primate present is common langur, although rhesus macaque has been sighted outside the park boundaries. Some 83 species are reported from the biosphere reserve.

A total of 114 bird species belonging to 30 families was recorded during the 1993 Nanda Devi Scientific and Ecological Expedition, some 67 for the first time. Species abundant during May and June include crested black tit, yellow-bellied fantail flycatcher, orange-flanked bush robin, blue-fronted redstart, Indian tree pipit, vinaceous-breasted pipit, common rosefinch and nutcracker. Species richness was found to be highest in temperate forests, with a significant decline in richness as elevation increased.