With nearly 1600 km of of palm fringed Coastline baked to perfection surrounding the country Sri Lanka is the ideal destination for beach bums worldwide. May it be windsurfing, kayaking, yachting, water skiing, scuba diving or jut 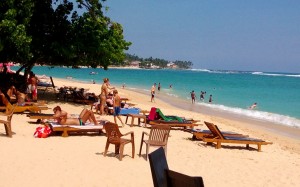 lazing around for the perfect tan, Sri Lanka offers it all. The two weather systems of the monsoon winds makes Sri Lanka’s beach holiday a year round prospect. The north east winds make the south western coast sunny and the sea calm from November to March. The South West winds make the East Coast waters quiet with the constant sun shine happily in agreement.

Beruwala is the first of the beaches to be met when travelling from Colombo. Famed for its tranquil bay with the palm shaded beach Beruwala offers excellent water sport facilities.

Benthota, the next in line is known for golden beaches dotted with luxury resorts and gentle seas, even during the rough seas. Tangalla is the rising star among the southern beaches is known for calm blue waters bordered with palm covered beaches. It is the dividing line between the tropical coves that dominate much of the south-west coast and the long, wave-lashed beaches that are found in the south-east corner of the island.

Mirissa is the beach resort for the lethargic, designed to be indulged at a slower pace watching the world pass by. It is also the best place for an ocean safari in search of blue whales and dolphins. Nights can be longer in Unawatuna, the most popular beach town in South. Many head to Unawatuna on Fridays for nonstop partying throughout the weekend yet this had not spoilt the tranquil charm in most parts. Snorkelling at the Buena Vista Reef is a thrill of a life time while boat rides to the jungle patched islands for glimpse of bird life is ideal for bird lovers.

Although Sri Lanka’s southern beaches has been long discovered by the world traveller the east coast is yet to be fully discovered. The most known among the Eastern beaches is the Arugam Bay, the high church of surfing enthusiasts’ in the region. Wildlife parks streaming with elephants, miles of lonely wide beaches and excellent views are the options available for non-surfers. Once a mere rumour, Uppuveli beach is open to the sun seekers after a three decade long civil war. The beach is quickly gaining fame as the best swimming and snorkelling location competing with the nearby Nilaveli beach and the coral gardens of the pigeon island.

On the Western corner of the country to the north of Colombo is the Negambo lagoon. Its beaches, an old favourite with local and foreign visitors and lagoon famed for lobster harvesting. The collection of resort hotels offering options of water sports competes with the urge of just sit and watches the fishing boats disappear in the horizon. Further north from Negombo is the Kalpitiya, sandwiched between the sea and the lagoon the beach is ideal for the lazing around yet the sea off Kalpitiya is the best location in the country to watch Blue whales, sperm whales and pilot whales and spinner dolphins, other species including Risso’s Dolphin, Bottlenose Dolphin and Striped Dolphin.

Recover from the jet lag with a stroll around the Negombo town, the little Rome of Sri Lanka. Negambo’s history dates back as far as the thirteenth Century as a port town used by the Moors and Sri Lankans to trade cinnamon and other spices, the city was later used as a trade town by Portuguese, Dutch and British. The remnants of colonial powers including the Dutch Fort and an intricate canal system that runs 100km from Colombo in the South to Puttalam in the north and many churches still rule the landscape of Negombo.

Highlights : A two hour ride from Negombo leads to the Kalpitiya Dutch bay, where Whales and Dolphins are found in abundance.Large pods of Spinner Dolphins could be found within a just one hour boat ride from Kalpitiya harbour while Sperm whales and blue whales are found in large pods near the Bar reef between the Months of April to November. Spend the rest of the day exploring the country’s largest coral reef, situated off the Dutch Bay.

Highlights : Spend the morning diving and exploring around the wreck of a Royal Air Force fighter bomber, which despite crashing over fifty years ago is in great form. It is common to sight large moray eels, as well as marine life.

Leave the evening dive for the third reef. A twenty meter dive, where there is no sigh of civilization just calm waters and coral reefs. It is a favourite site to spot different species of rays including marble rays while divers are greeted by pods of dolphins playing away.

Highlights : Spend the morning cruising along the colonial Dutch canals and head for Colombo for a might of shopping, partying or a quiet fine dining experience.

Highlights : A one and half hour drive along the Turquoise Indian Ocean brings you to Hikkaduwa and another series of exciting dives. Spent the afternoon exploring the oceans with an evening dive to Hikkaduwa’s exciting wreck diving sites.

Other Diving Sites of Hikkaduwa Include,

Highlights : Begin the day with dives at decided locations. Start for Mirissa after lunch with a stop at the Dutch Galle Fort and Galle maritime museum.

Highlights : Heads to the middle of the ocean with the day break in search of gentle giants of the ocean. Blue whales, Bryde´s whales, Sperm whales, Fin whales, bottle nose dolphins, common dolphins and spinner dolphins grace the waters of Southern Seas from Weligama to Mirissa and can be found within just eight to ten nautical miles from Mirissa harbor.