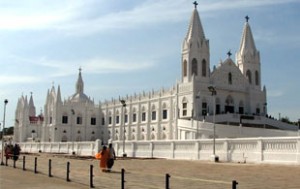 Meeting and assistance on arrival at Trichy airport in the morning. Then transfer to Vailankani (155 km – 3.5 hours). On arrival there transfer to Hotel. Afternoon visit to Church Complex.

Today proceed for the full Day Local sight seeing visiting Fort St George, Kapaleeswara Temple, Marina Beach, Santhome Cathedral, etc. Fort St. George: – George Fort is located on the banks of Bay of Bengal. It was built by the British East India Company in 1640 AD. The fort is believed to be the first establishment of the British in India. It is a military architecture marvel, which was erected as a trading post and later evolved to be the origin of modern Indian Army. St. George Fort holds great historical importance Towards the end of the 17th century, the East India Company was established by the British. Their main aim behind this was trade and economic activities. After this, the company was looking for a permanent trading station. Their dream was realized when they acquired the land on which the fort stands today. The company built the fort on this land and expanded their activities. It served as a home away from home for the officials of the East India Company. This helped in the development of the city of Madras.

Santhome Cathedral:- Roman Catholic cathedral built in the 16th century by Portuguese voyagers, San Thome Cathedral was refurbished as a cathedral by the British in 1893 to display neo-Gothic architecture. Later this famous pilgrimage center, was bestowed with the status of a minor Basilica by Pope Pius XII on 16th March 1956 to appreciate its antique value and chronological significance. Basilica refers to a royal house or palace and evaluates the glory of a church. St Thomas built a church at San Thome. After his martyrdom, his body was buried in the Church built by him. A pot containing earth, moistened by his blood and the lance with which he was pierced were both buried in his tomb. The foundation for a new Church was laid on 2nd july 1523. The Marina Beach, covered with glittering golden sand and a clear strip of blue sea, is among the most magnificent beaches in India. Sited at Kamarajar Salai Road, at a distance of 3 km from the capital city of Tamil Nadu, it is said to be the second longest beach in the world, extending to a length of 13 km from St. George Fort to Mahabalipuram. Much of credit for converting this beach into a tourist spot goes to Governor Mountstuart Elphinstone Grand Duff, who took the needed measures during the 1880s. Here, the experience of watching the sun rise and set is at its captivating best, and breathtaking. Enclosures with palm trees compel you to take a slow and relaxed walk. The horseback ride along the shores will lift up your spirits further. However, swimming and bathing here can be dangerous because of the undercurrent being turbulent and chaotic. But, rest assured, after visiting the beach, you will feel the waves and winds of rejuvenation take hold of your every sense.

Overnight stay at Hotel in Channai.

Morning departure transfer to airport to catch the flight for onward destination.