Older than the Himalaya mountains, the mountain chain of the Western Ghats represents geomorphic features of immense importance with unique biophysical and ecological processes. The site’s high montane forest ecosystems influence the Indian monsoon weather pattern. Moderating the tropical climate of the region, the site presents one of the best examples of the monsoon system on the planet. It also has an exceptionally high level of biological diversity and endemism and is recognized as one of the world’s eight ‘hottest hotspots’ of biological diversity. The forests of the site include some of the best representatives of non-equatorial tropical evergreen forests anywhere and are home to at least 325 globally threatened flora, fauna, bird, amphibian, reptile and fish species 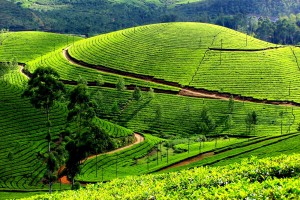 The Western Ghats are internationally recognized as a region of immense global importance for the conservation of biological diversity, besides containing areas of high geological, cultural and aesthetic values. A chain of mountains running parallel to India’s western coast, approximately 30-50 km inland, the Ghats traverse the States of Kerala, Tamil Nadu, Karnataka, Goa, Maharashtra and Gujarat. These mountains cover an area of around 140,000 km² in a 1,600 km long stretch that is interrupted only by the 30 km Palghat Gap at around 11°N.

Older than the great Himalayan mountain chain, the Western Ghats of India are a geomorphic feature of immense global importance. The Outstanding Universal Value of the Western Ghats is manifested in the region’s unique and fascinating influence on large-scale biophysical and ecological processes over the entire Indian peninsula. The mountains of the Western Ghats and their characteristic montane forest ecosystems influence the Indian monsoon weather patterns that mediate the warm tropical climate of the region, presenting one of the best examples of the tropical monsoon system on the planet. The Ghats act as a key barrier, intercepting the rain-laden monsoon winds that sweep in from the south-west during late summer.

Criterion (vii): The Western Ghats region demonstrates speciation related to the breakup of the ancient landmass of Gondwanaland in the early Jurassic period; secondly to the formation of India into an isolated landmass and the thirdly to the Indian landmass being pushed together with Eurasia. Together with favourable weather patterns and a high gradient being present in the Ghats, high speciation has resulted. The Western Ghats is an “Evolutionary Ecotone” illustrating “Out of Africa” and “Out of Asia” hypotheses on species dispersal and vicariance.

Criterion (ix): The Western Ghats contain exceptional levels of plant and animal diversity and endemicity for a continental area. In particular, the level of endemicity for some of the 4-5,000 plant species recorded in the Ghats is very high: of the nearly 650 tree species found in the Western Ghats, 352 (54%) are endemic. Animal diversity is also exceptional, with amphibians (up to 179 species, 65% endemic), reptiles (157 species, 62% endemic), and fishes (219 species, 53% endemic). Invertebrate biodiversity, once better known, is likely also to be very high (with some 80% of tiger beetles endemic). A number of flagship mammals occur in the property, including parts of the single largest population of globally threatened ‘landscape’ species such as the Asian Elephant, Gaur and Tiger. Endangered species such as the lion-tailed Macaque, Nilgiri Tahr and Nilgiri Langur are unique to the area. The property is also key to the conservation of a number of threatened habitats, such as unique seasonally mass-flowering wildflower meadows, Shola forests and Myristica swamps.

The property is made up of 39 component parts grouped into 7 sub-clusters. The serial approach is justified in principle from a biodiversity perspective because all 39 components belong to the same biogeographic province, and remain as isolated remnants of previous contiguous forest. The justification for developing a serial approach rather than just identifying one large protected area to represent the biodiversity of the Western Ghats is due to the high degree of endemism, meaning that species composition from the very north of the mountains to 1,600km south varies greatly, and no one site could tell the story of the richness of these mountains. The formulation of this complex serial nomination has evolved through a consultative process drawing on scientific analysis from various sources. The 39 component parts grouped into 7 sub-clusters together reflect the Outstanding Universal Value of the property and capture the range of biological diversity and species endemism in this vast landscape.

The 39 component parts of this serial property fall under a number of protection regimes, ranging from Tiger Reserves, National Parks, Wildlife Sanctuaries, and Reserved Forests. All components are owned by the State and are subject to stringent protection under laws including the Wildlife (Protection) Act of 1972, the Indian Forest Act of 1927, and the Forest Conservation Act (1980). Through these laws the components are under the control of the Forestry Department and the Chief Wildlife Warden, providing legal protection. 40% of the property lies outside of the formal protected area system, mostly in Reserved Forests, which are legally protected and effectively managed. The Forest Conservation Act (1980) provides the regulatory framework to protect them from infrastructure development.

Integrating the management of 39 components across 4 States is a challenge, for which a 3-tier governance mechanism is required that will operate at the Central, State and Site levels to provide effective coordination and oversight to the 39 components. A Western Ghats Natural Heritage Management Committee (WGNHMC) under the auspices of the Ministry of Environment of Forests (MoEF), Government of India to deal with coordination and integration issues is already functional. All 39 components in the 7 sub-clusters are managed under specific management / working plans duly approved by the State/Central governments. The livelihood concerns of the local communities are regulated by the Forest Rights Acts, 2006 and their participation in governance is ensured through Village Ecodevelopment Committees (VECs).